If I didn’t know better, I would think Generation Y is the title of a sci-fi movie. Instead no, it refers to a demographic of people born in a period between the early 80s to the late 90s. They are also known as Millennials.

Why am I writing about a generation that follows mine, the Generation X? Because I find them very difficult to understand. They are people who are more entrepreneurial than me, more prone to take a risk for an idea or project they believe in, and are generally better educated – sometimes savvy – and more mature. Maturity that I also experience when talking with the current younger generation (the Generation Z), as I feel I’m conversing with an adult, instead with a 10 years old child.

I’m still reeling under the shadow of uncertainties and fears trickled down from the post-war generation of my parents — people who endured tough times and worked hard to achieve and build a life for themselves and their families. The education I received has been the traditional path of ‘study and get a degree, find a steady and secure job in which to remain until retirement, marry and have children. Save money, don’t waste’. Security, stability, living in the comfort zone were of upmost priority. I can’t blame the Baby Boomers (my parents’ generation), as they lived their youths unsure if they would eat a meal the next day (yes, indeed, there have been rich people too, but they were few and far apart).
I have been lucky as, thanks to my parents’ efforts, I never suffered (hardship). But parsimony, cautious thinking and spending were the order and instruction of the day.

The offspring of the 80s-90s rarely experienced hardship, and have been free to explore, to try new things and ventures, to be creative and free in mind and spirit. So, what is that I don’t understand of them, then? It’s their ability to easily step out of a comfort zone and leave the proverbial nest, contrary to my reticence in doing so. What for them could be a snap of the fingers, for me it becomes a massive task. Generation Y are people who have grown up with the Internet, with mobile phones, with social media, and who are living into a global village that immediately connects one person to another. They are those whom the world is their oyster, and who are busy setting the foundation of our tomorrow.

I’m at an age where any Millennial could be my own child, so I imagine that the generational gap I feel about them is of the same type I experienced with my parents. Does history repeat itself?

I would love to read in the comments what parents are experiencing with their own children. You could also read an excellent book on the Generation Y topic: “Bridge the Generation-Y Gap” by Demyan Rossouw, which will provide parents and employers with invaluable tools to understand and work with them. You can buy the book at this link:
Bridge the Gen Y Gap 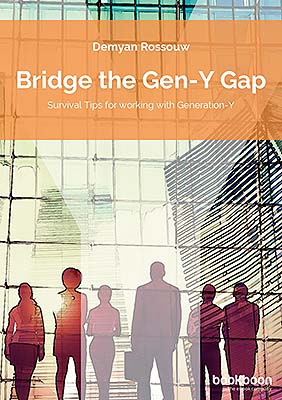